Background Chatter and NPC’s are the backbone of an adventure. They give you so many leads and places to go, and they give your world color, depth, and interest. I find that NPC’s are fun when you bring them through multiple campaigns. It kinda gives continuity for the Players, even though their PC’s may not know the NPC. And any secret, issue, and such that you don’t use in one campaign can totally be reused.

One of my DM’s used to use one NPC through all the games he ran, no matter what RPG we were playing, he just tailored that character to the game. It was kind of fun, having that. 🙂

I like to have a list of secrets for characters to learn. Some that certain characters may know depending on their background. This is a good sheet to keep track of what secrets you want in your campaign, and when characters learned them. 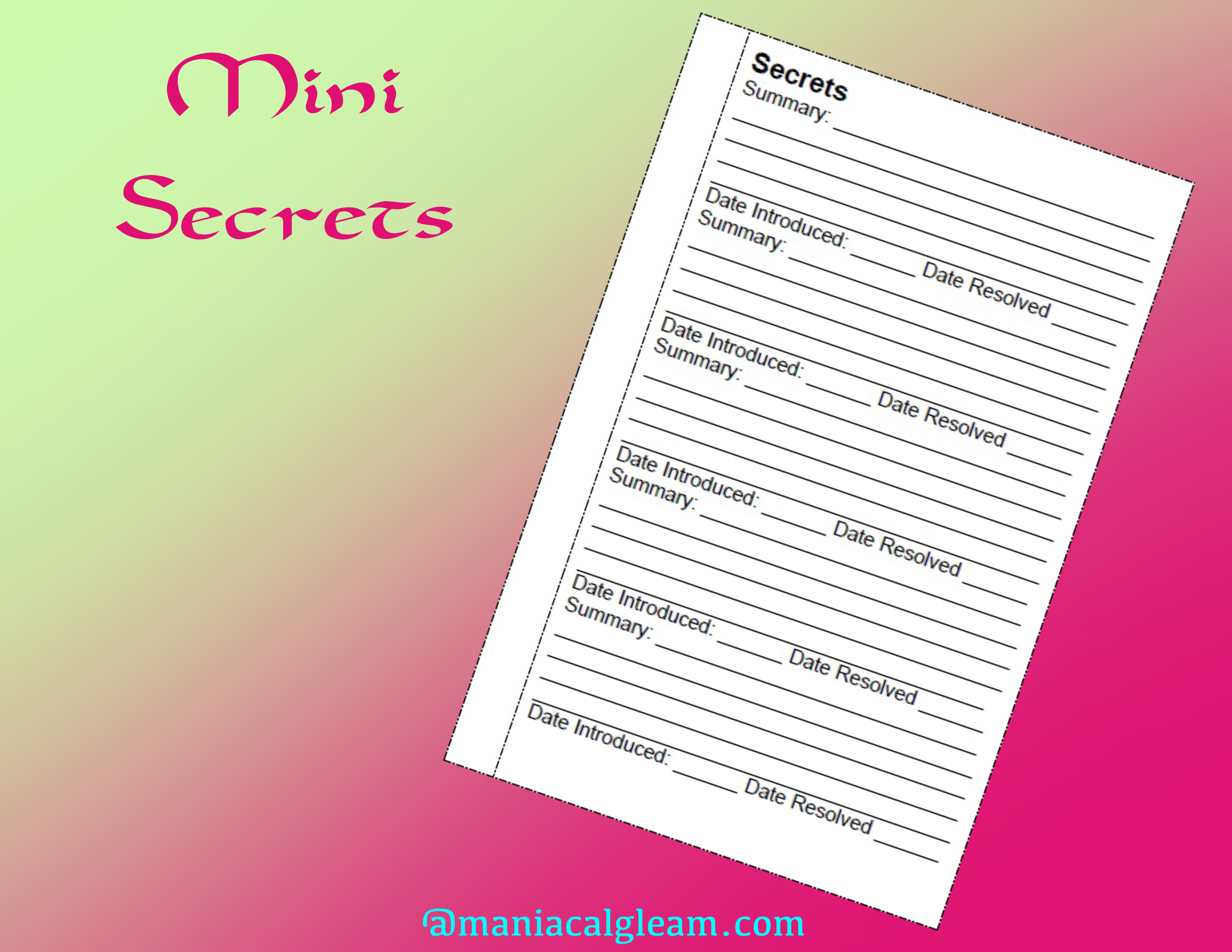 This sheet is to kinda track background events you want in a city in your game – Like, say, a fire. describe where in the city it happens, how the government and law enforcement react, the impact, aftermath, and Adventure hooks involved. 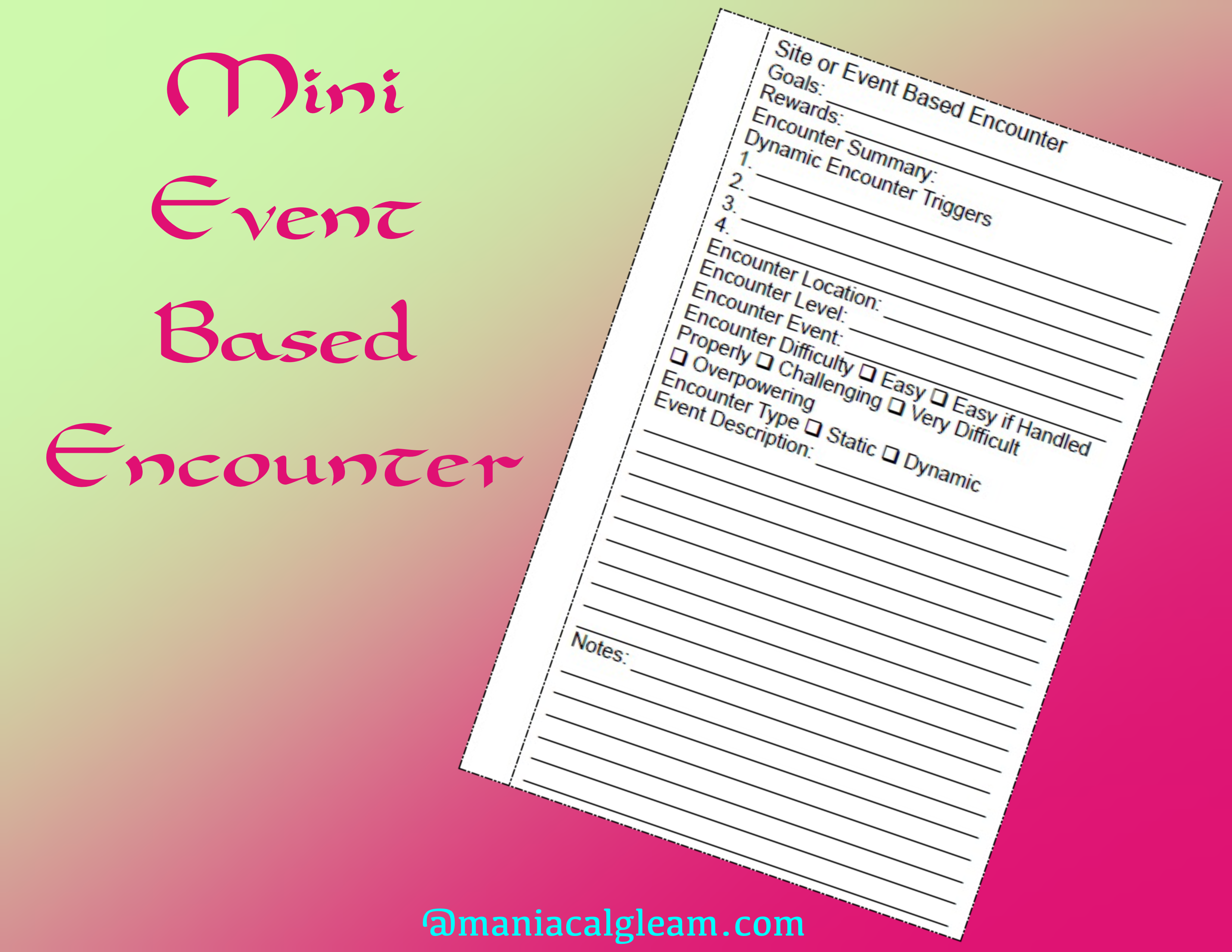 Issues and leads – just a list. It can also have rumors involved, and there’s space to say whether it’s true or not. 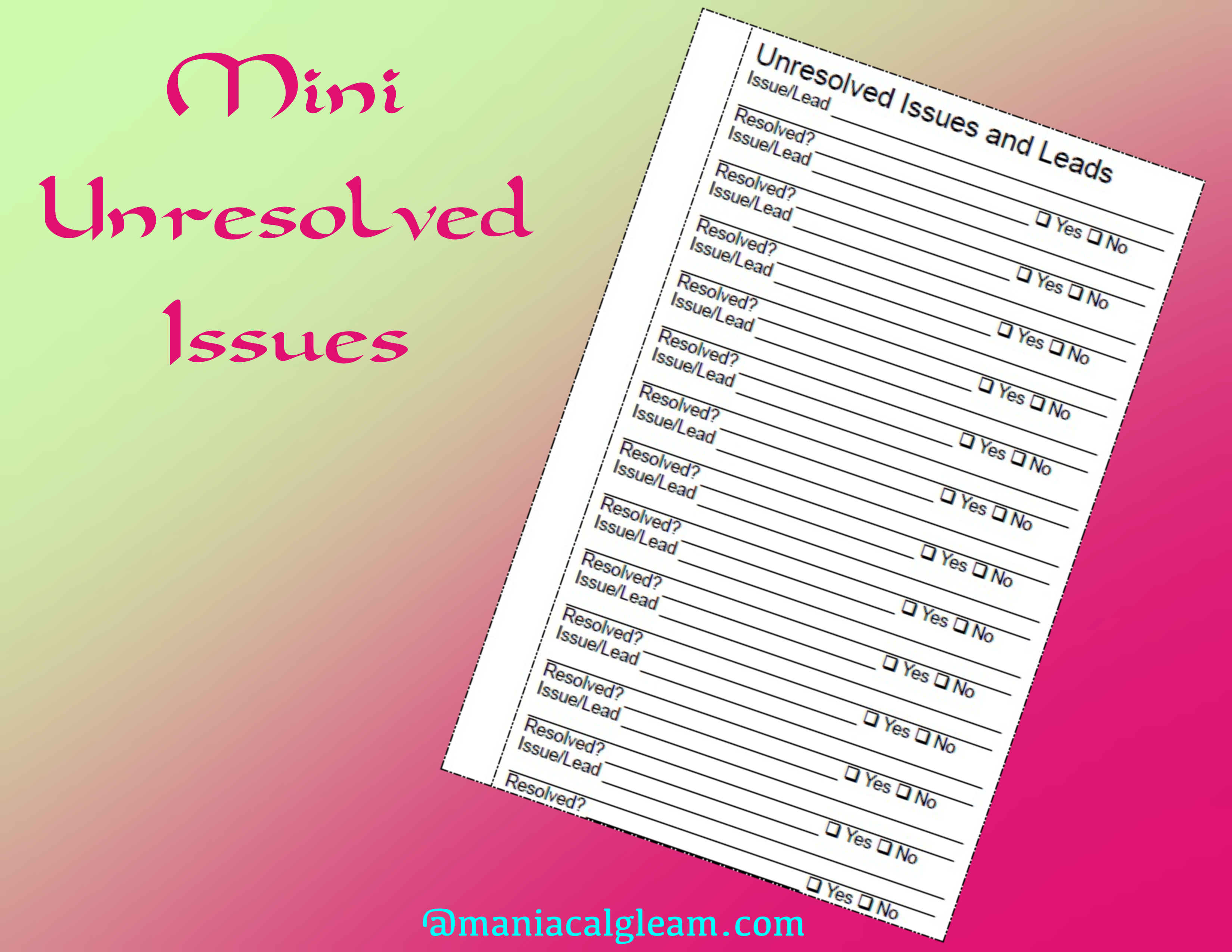 A simple sheet for Riddles and puzzles – Room to write the base idea, room for the solution(s). Useful in any game, so you can just keep a running list, and pull it out when you need a puzzle or riddle. 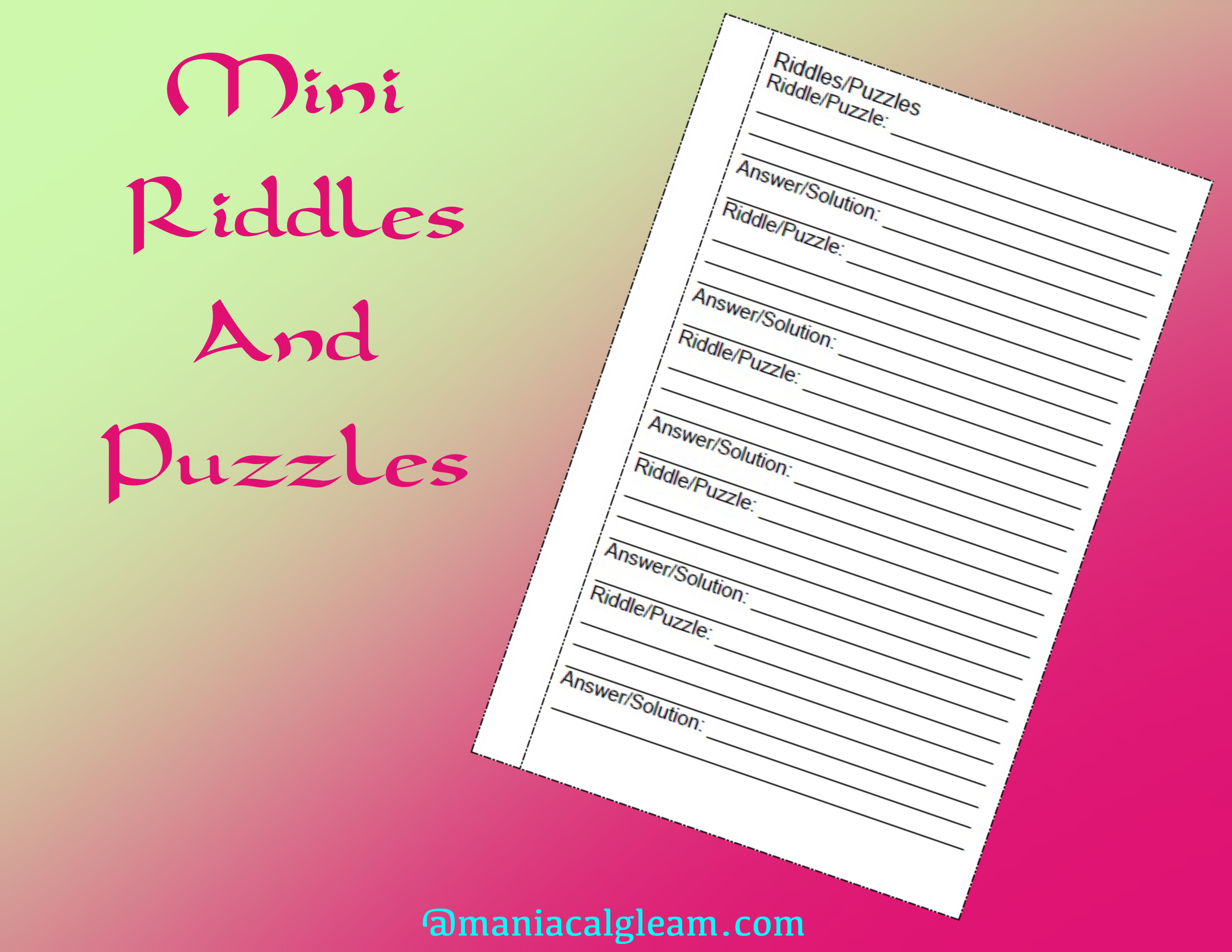 This sheet is minor rumors and events that the characters may want to follow up on. It’s a good way to add some color and detail and wild goose chases to your campaign if you’d like. 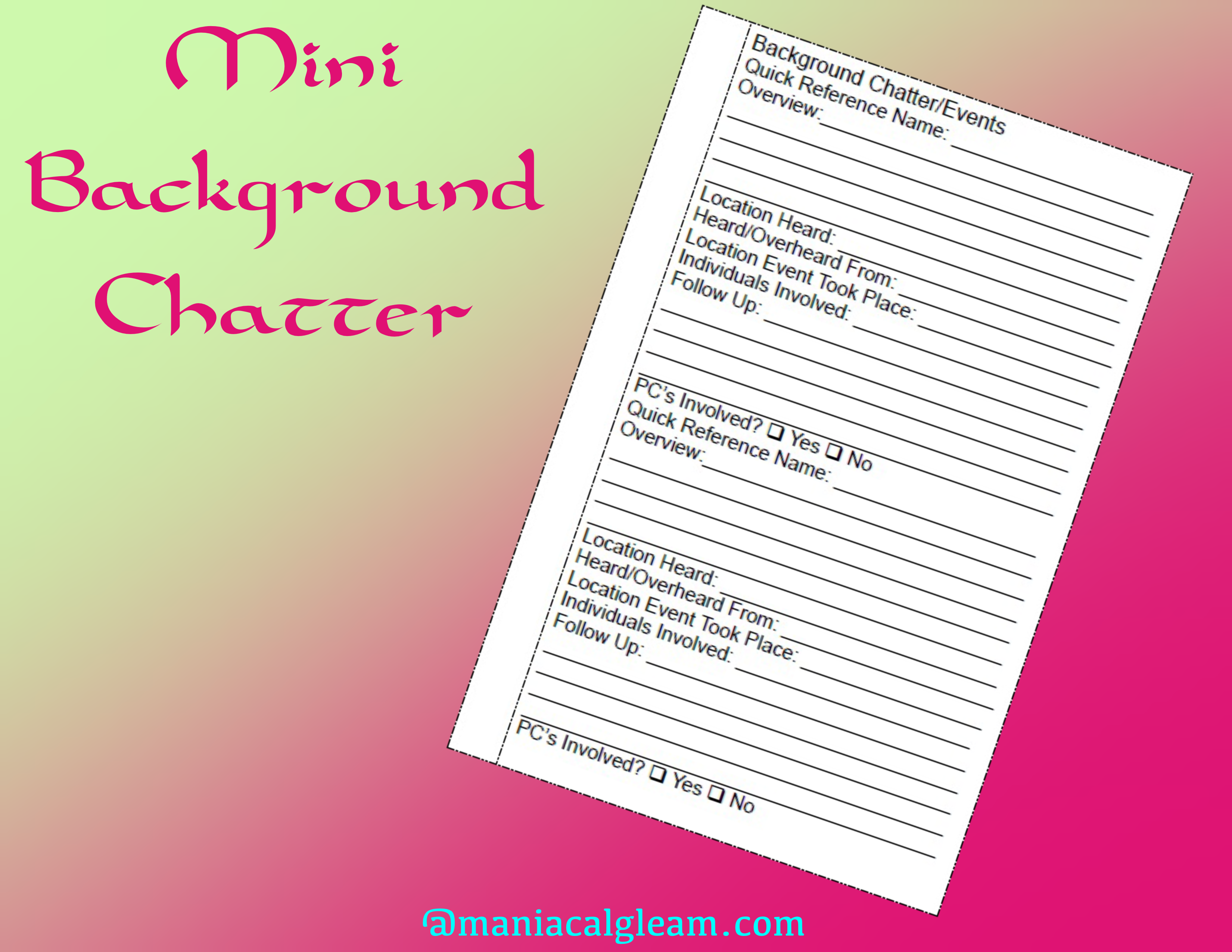 This sheet is for NPC’s that are recurring, and a big part of the story. This could be the bartender your PC’s enjoy talking to, the major villains, a companion that attaches themself to your party. It’s a detailed 3.5/Pathfinder sheet to fill out. 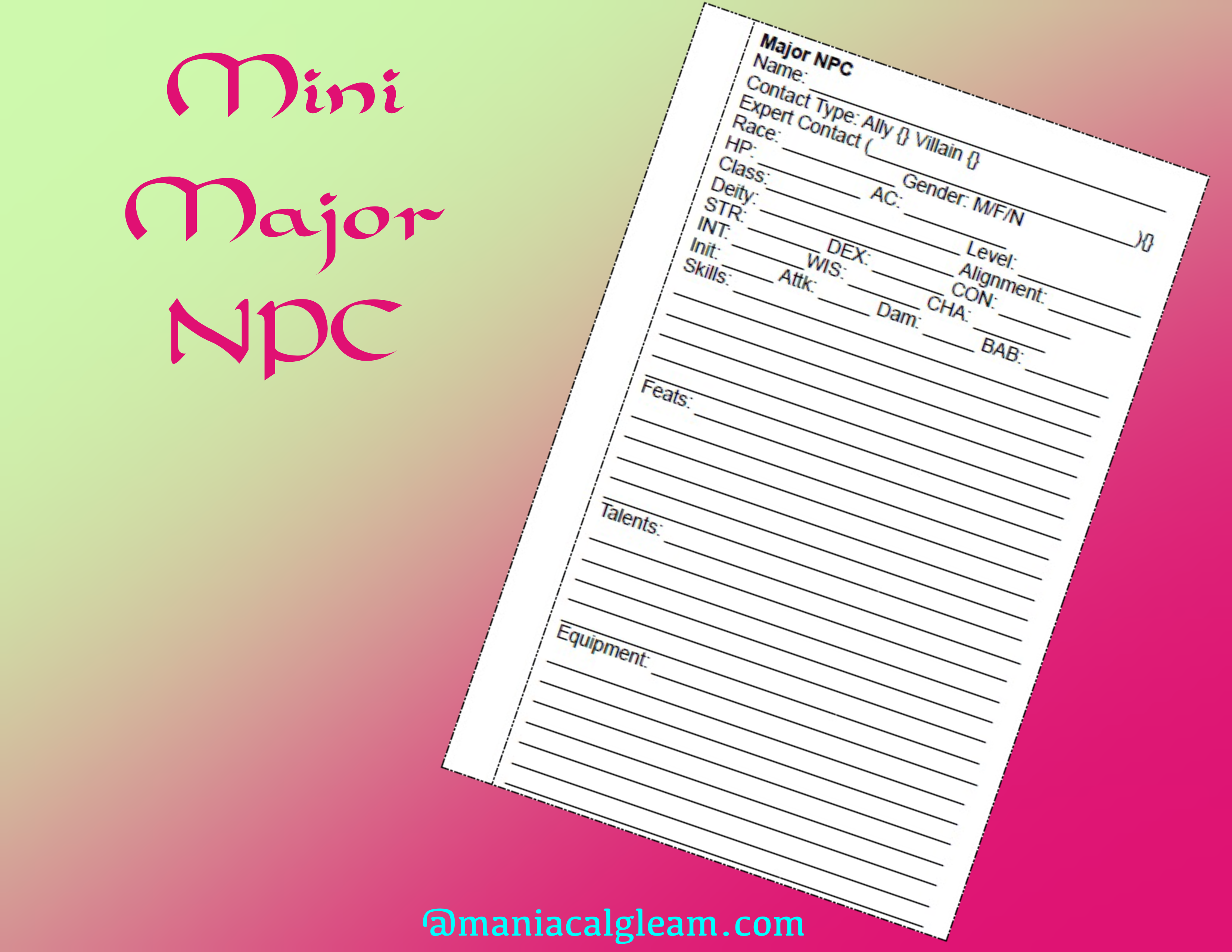 This is just a tracker for Minor NPC’s – Ones that may show up in a lot of background stuff, or one-offs that your characters fight and defeat/kill, and maybe never see again. Or it could be that guy who sits at the end of the bar the PC’s love to go to, who occasionally spouts sage-sounding advice but never really gets to know them well. 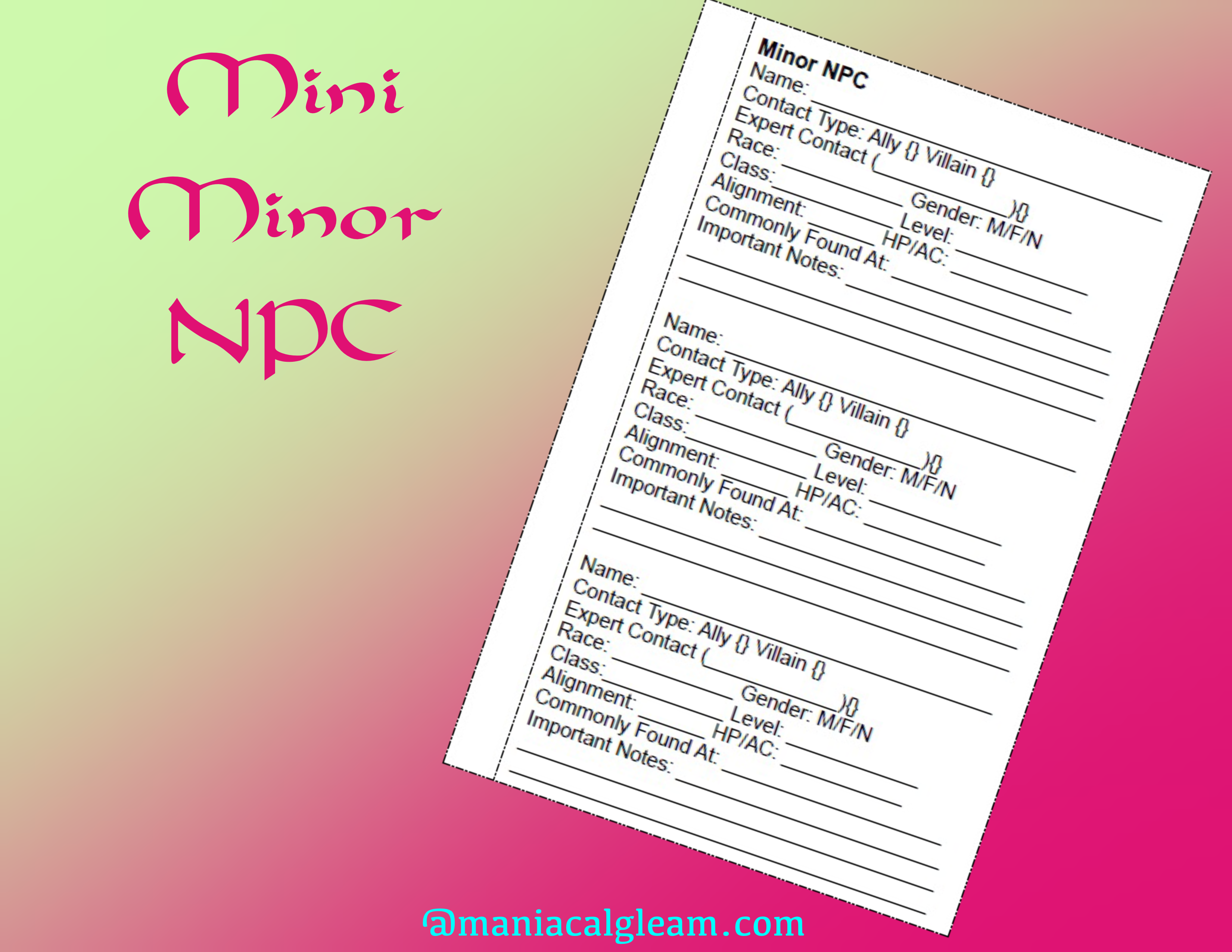 This site uses Akismet to reduce spam. Learn how your comment data is processed.

Printables ARE NOT to be added to any other website or distributed in anyway (this includes message boards or email list). If you wish to share my printables, send them the link to my site.

Printables are not to be sold.

Do not link the images or PDF files directly from your website, link the posts instead.